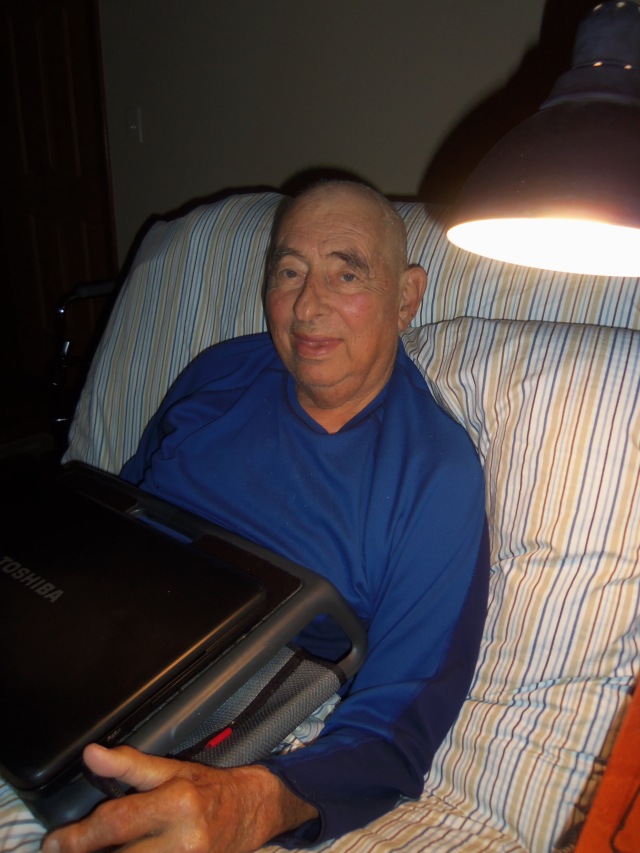 In case you might be wondering just what the status of your Thursday blogger is, I have been in and out of Upper Chesapeake Medical three times since Labor Day,  fighting off one of our number one public enemies – cancer.  I told you in an earlier blog about the great care that I received there during the first week of my stay and the great people on the first floor that treated me almost like Family.  I was discharged for a few days but had to be re-admitted and spent almost three weeks on the third floor and again I can’t say enough good things about Upper Chesapeake Medical Center and the people who work there.

I have had some transfusions, infusions, trying to come to some conclusions about how to fight off this invasion of one of my vitals called the bladder.  Like the saying goes, progress is as good as can be expected so far, under present conditions, and we’re looking at it with the old “fish eye” until January. That sounds about as vague as Lawyer talk, doesn’t it?  Now let’s get to some important stuff.

I am now residing in luxury at son Lance and his wife Robin’s house in Essex, not the Essex of Merry Olde England, but the Essex on the edge of Baltimore… beautiful  spot… five acres of woods surrounding a new house, being waited on hand and foot.  You may still catch me in some flashbacks about my patio on the Rumsey Island Canal,  but in truth, I had to give up my perch on that Gunpowder waterway.

I will miss that great horned owl that sits in a tree across the Canal at dusk, hooting his heart out, to get a reply from one of his compatriots in a big Oak along the Little Gunpowder Falls, before he sets out on his nightly hunt. And I often wonder if that wild turkey hen will be running by the patio one of these cold winter mornings as she did earlier this year. I

can’t forget the Bald Eagles who fished the Canal in front of my apartment or the Osprey who were also on constant fishing patrol, taking them back to their young who were in nests nearby. I was nearly on a first name basis with some of the hundreds of Canada Geese who frequented the waterway and came to the patio door looking for a hand-out after the Mallard ducks were done begging.

I am also so grateful that I was able to spend that last 10 years of peace and quiet there, observing all those beautiful sunsets and sunrises, eight years of which was with Joan, my wife of 60 years who passed away on December 22, 2010.

The first ten years of my life, I was born on and spent nearly the entire 1930’s, in the peace quiet of a very rural farm of ten acres. Ironically, I have lived the last ten years just a few miles from where I was born.  I went back there recently, to try to recapture some of that “old farm” feeling, I suppose, but alas, it was gone, the farm and the feeling. It has been written that we can’t go back and ‘tis true.

Both the farm and the old barn had disappeared, part of the open fields are filled with houses and a small piece became part of Gunpowder State Park, still leaving room for all the wildlife along our Big Gunpowder River.  That is one thing I can still  count on, winding its way through Baltimore County, on the way to the Chesapeake Bay and then to the Atlantic Ocean.

You haven’t heard the last of  my weekly tales or monthly articles and hopefully I can tell you of  some new adventure or ideas, or maybe recall  a past happening that will deserve your attention.  If you remember anything about old Kingsville or Bradshaw or St. Stephen Church and School,  let me hear from you.  I am on Facebook or you can comment at the bottom of this blog….I am also available by e-mail at dlangrehr@aol.com.  I am looking forward to hearing from you.

7 Responses to Welcome back Don!